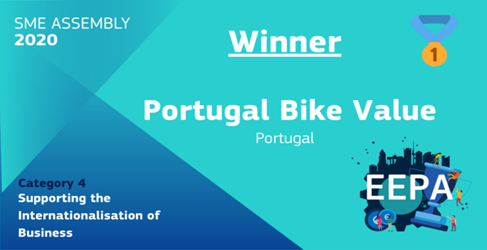 The EEPA, European Business Promotion Awards, were announced today in Berlin and Portugal Bike Value received the Grand Prize to Support the Internationalization of Companies.

Portugal Bike Value is a project created in 2015 by ABIMOTA, which aims to promote the Portuguese two-wheel chain across borders. In 2019 Portugal asserted itself as the largest European bicycle producer, with two million and 700 thousand units, with national exports worth more than 400 million Euros.

For ABIMOTA, this victory reflects the international recognition of Portugal Bike Value, but  “above all it reflects the good moment that the national two-wheel sector is going through. When we implemented this project in 2015, Portugal exported something like 150 million Euros and we almost tripled that amount in five years. ”  According to Gil Nadais, ABIMOTA's General Secretary, who adds that  “this growth and, above all, the international recognition of the Portuguese sector, is due to all the work carried out by the sector, which affirmed Portugal as a destination of quality, innovation and entrepreneurship.”

“We have among us, the first company in the world to weld aluminum frames using robots, the most advanced painting lines, but also the company that makes the lightest bicycle saddles in the world  (24 grams ndr) , one of the companies that more patents registered in the country, factories that make wheels almost exclusively for competition teams and within a few months, the first carbon frame factory outside Asia. We also have the largest bicycle assembly plant and the largest bicycle wheel factory in Europe. ”  He listed Gil Nadais.

DISCOVER THE CYCLING SECTOR IN NUMBERS

BE A PART OF THE CLUSTER